Happy Holidays to you. I hope you have had a wonderful year and are enjoying getting back to a more normal way of life.

I have had another great year with Harvey! That darling rabbit just keeps hopping along.

This year it was an honor to participate in the Denver Woman’s Press Club “Unknown Writers” program. I judged short stories by contestants who had never published before and then attended the reading at the club by the finalists. So much talent out there.

It was a thrill to be interviewed by Janice Simpson who produces a program called “All the Drama” for the website Broadway Radio. She did a wonderful job of reviewing my book before asking me if I had ever seen a production of Harvey. At the time I had never seen one, but I can now say that this November I attended a production at the Vail Mountain School.

All year I have been working on a new book called An American Family that I hope to publish this coming year.

Thank you for being part of my expanding circle that I meet as I continue to do what I love best, writing. 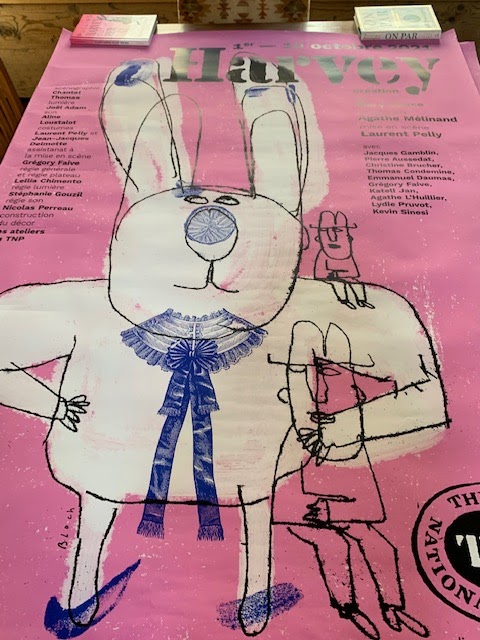 This poster (approximately five feet by 3 feet) arrived  at my home in November from Lyon, France where a  French production of Harvey began a year-long tour of cities throughout the country. Hopefully we will soon find a public space in Denver where it can be viewed.