I Saw a Purple Cow 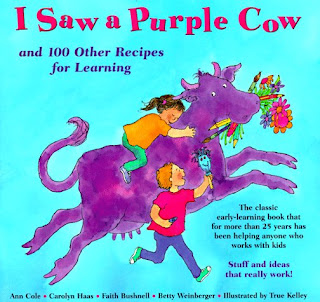 So I'm hearing about young parents trying to figure out how to get through the day during these trying times and I'm remembering my own trials and tribulations.

What comes to mind is:
Living through brutal Chicago winters with an infant and a toddler. One day, stuck in the house after another blizzard and with my husband downtown and me an hour away in a suburb, throwing the two kids on a sled and pulling them through the snowy terrain to the local merchants' district for a hamburger and fries at Shelton's Grill.  And then pulling the sled back again. It took up most of the day.
Being stuck in the house for several weeks while all three of us were sick with the flu and dramatizing a book  (I think it was Dr. Seuss) with lifesize posters and dialogue. Our goal was to entertain for an upcoming Thanksgiving.
Climbing up three flights of stairs at the local YMCA for a kids' class, hauling the umbroller and the two kids and getting to the top and finding out that I had the wrong date for the class.
Taking my two year old to Moms and Kids swimming lessons in the bitter cold winter even though I hate to swim.

Still I look back at raising my kids as a great time in my life. I bought all the books of activities to do with kids and found the Sesame Street Activities Book and I Saw a Purple Cow to be a great source of ideas. Thank goodness that every afternoon after their naps I could place both kids in front of the television to watch Sesame Street. I actually watched too and that was followed by Mister Rogers' Neighborhood. We made cookies for every occasion always using the basic butter cookie recipe from the Sesame Street Activities Book. 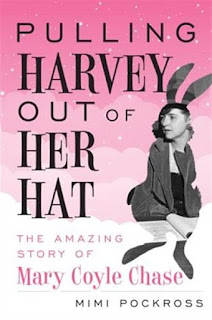 Nostalgia set in last Sunday when I was watching a segment on CBS's Sunday Morning that featured entertainment icon Martha Stewart.  There she was with her signature blonde casual haircut, garbed in a sunny yellow sweater and speaking from her shining stainless steel kitchen outlined on the top of the screen by an array of at least twenty-five spotless copper pans and standing behind her counter where an ultra deluxe mixmaster sat next to a bowl of freshly hatched eggs from her nearby chicken coop.

When I was a young mother, Stewart was a fast rising star that used her domestic talents to create an empire that eventually included dozens of cookbooks, several television shows and that still produces a regularly published magazine. Except for her controversial stint in jail for insider trading, Stewart is an ironic example of how she used women's traditional skills to build a wealthy empire.

In the same week that Martha's segment on how to make everything but the kitchen sink cookies during the coronavirus was taking place, I had just finished watching the fifth episode of Mrs. America starring Cate Blanchett, an FX miniseries about the seventies and the women's lib movement, a time during which I was a young wife and mother.

Blanchett stars in the role of Phyllis Schafly, who rose to the top as the spokeswoman against the Equal Rights Amendment. Also featured in the series are the high profile feminists of the time who opposed her: Gloria Steinem, Betty Friedan, Shirley Chisholm, and Bella Abzug.

I recall the times vividly. My peers and I were all struggling to figure out which side of the argument to support. Did we want to be domestic like Martha or did we want the instant equality of opportunity that Gloria and Bella were proposing? Phyllis believed that by diminishing the line between women's and men's roles that society would suffer. She gathered legions of followers that impressed the Republican establishment and made her a power player all while living at home with her lawyer husband and five children.

All of my friends were in favor of the ERA and, though I'm more of a sideline person, I signed the Illinois petition and once joined a protest in Chicago's Grant Park. (Of note: Schafly was from Alton, Illinois and the amendment failed in the state).

Many of us during this time decided to work part-time work while others stayed home and hunkered down as full-time mothers who filled in with book clubs and volunteer work. I personally took a part-time marketing job at a small shopping district near my house and worked for several women merchants, also mothers and wives.

Recently I gave a talk to a group of women some of whom had no knowledge of this time and never had to fight for gender equality. They were professionals and mothers and had never thought about staying home. It was a shock to one that I had any guilt about trying to balance a professional life with being a mother. Her kids were raised in day care and had learned at an early age how to take care of themselves.

This week's television programs on Martha Stewart and Mrs. America revisit women's choices and let us all reevaluate the women's movement. Can a domestic queen like Martha Stewart receive adoration for building an empire based on the tools of a homemaker? Was Phyllis Schafly trying to balance her own ambitions with being a homemaker? Were the feminists all just bitter women who had an axe to grind and made the movement their job? Is it a good fight to specifically legislate that women should have equal opportunities in every sector of American life?

The question of the ERA amendment is currently being revisited and could possibly do better this time. We'll see.